Welcome to our publications section!

This is how it works:

You can just browse through our list of publications or filter by 'theme' or 'publication type'. If you would like to search for a specific term, please refer to the full-text search.

Since GPF and our network is publishing in English as well as in German language, there might be further publications on your topic of interest available when changing the website language. You can do so by clicking on 'DE' on the top right of the page.

The Precarious State of Public Finance 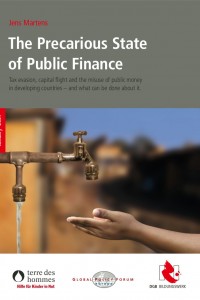 Tax evasion, capital flight and the misuse of public money in developing countries – and what can be done about it 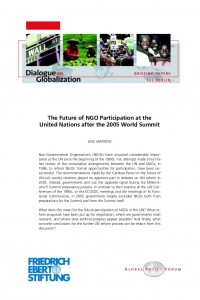 Non-Governmental Organisations (NGOs) have acquired considerable importance at the UN since the beginning of the 1990s. Yet attempts made since the last review of the consultative arrangements between the UN and NGOs, in 1996, to reform NGOs’ formal opportunities for participation, have been unsuccessful. The recommendations made by the Cardoso-Panel on the future of UN-civil society relations played no apparent part in debates on UN reform in 2005. Instead, governments sent out the opposite signal during the Millennium+ 5 Summit [...]

A Compendium of Inequality 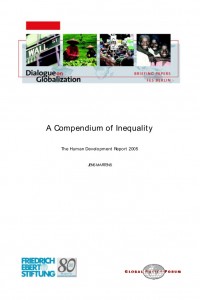 The United Nations Development Program (UNDP) published the 2005 Human Development Report just a week before the Millenium+5 Summit. The release was intended to influence governments to promote a more incisive approach to development, aid and security policies. This briefing paper analyzes the report and agrees with the UNDP's concern that in the current path towards achieving the Millennium Development Goals, the lack of distribution and social justice policies is leading to a "blind spot." (Global Policy Forum and Friedrich [...]
read more

A Question of Political Will 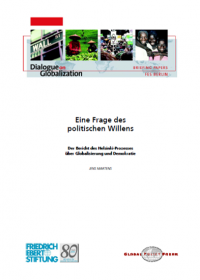 The Helsinki Process Report on Globalisation and Democracy

This briefing paper analyzes the report "Mobilising Political Will," published by the Finnish government in the context of the "Helsinki Process on Globalisation and Democracy" conference. The Helsinki Process tries to bring more democracy into the global governance system, through a "multi-stakeholder approach," involving not only governments but also NGOs and business representatives. While participants generally expressed support for the multi-stakeholder approach, some NGO representatives hinted that sharp differences of opinion among the participants led to "too timid" suggestions on [...]
read more 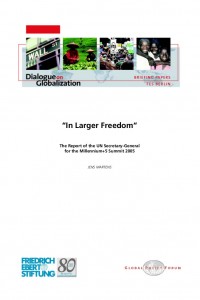 This Global Policy Forum and Friedrich Ebert Foundation Briefing Paper examines Secretary General Kofi Annan's UN reform agenda and notes that "for some, the initiatives are not sufficiently far-reaching, [yet] others view them as too radical and unsuitable to implement politically." The paper criticizes Annan for his weak stance on alternative development financing, including global taxes on currency transactions. It also draws attention to the need for greater civil society participation in the preparations for the Millennium+5 Summit in September [...]

UN Reform and the Millennium Goals 2005 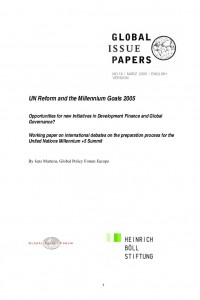 Opportunities for new Initiatives in Development Finance and Global Governance? Working paper on international debates on the preparation process for the United Nations Millennium +5 Summit

The year 2005, it is to be hoped, will be a decisive year for thorough reform of the United Nations. The High-Level (heads of state and government) Plenary Meeting of the 60th Session of the UN General Assembly (Millennium +5 Summit) is due to meet in the middle of September 2005 to discuss the future institutional and sectoral development of the UN. On the agenda are the new challenges of global security, poverty eradication, the implementation of human rights, gender [...]

Report of the UN Millennium Project „Investing in Development“ 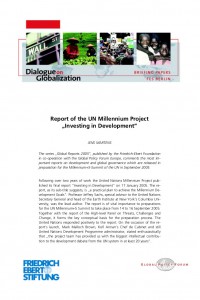 Cover
After more than two years of work, the United Nations Millennium Project published its final report, "Investing in Development," in January 2005. This Global Policy Forum and Friedrich Ebert Foundation briefing paper provides a more accessible analytical summary on the massive report and places it in a political context.
read more