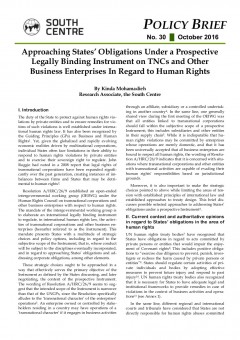 The duty of the State to protect against human rights violations by private entities and to ensure remedies for victims of such violations is well established under international human rights law. It has also been recognized by the Guiding Principles (GPs) on Business and Human Rights. Yet, given the globalized and rapidly evolving economic realities driven by multinational corporations, individual States often face limitations in their ability to respond to human rights violations by private entities and to exercise their sovereign right to regulate. John Ruggie had noted in a 2008 report that legal rights of transnational corporations have been expanded significantly over the past generation, creating instances of imbalances between firms and States that may be detrimental to human rights.
Resolution A/HRC/26/9 established an open-ended intergovernmental working group (OEIWG) under the Human Rights Council on transnational corporations and other business enterprises with respect to human rights. The mandate of the intergovernmental working group is to elaborate an international legally binding instrument to regulate, in international human rights law, the activities of transnational corporations and other business enterprises (hereafter referred to as the Instrument). This mandate presents States with a multitude of strategic choices and policy options, including in regard to the subjective scope of the Instrument, that is, whose conduct will be subject to the disciplines eventually incorporated, and in regard to approaching States’ obligations and addressing corporate obligations, among other elements.

These strategic choices ought to be approached in a way that effectively serves the primary objective of the Instrument as defined by the States discussing, and later negotiating, the content of the prospective Instrument. The wording of Resolution A/HRC/26/9 seems to suggest that the intended scope of the Instrument is narrower than that of the UNGPs, since the Resolution specifically alludes to the ‘transnational character’ of the enterprises’ operations. An enterprise owned or controlled by stakeholders residing in a country may have operations of a ‘transnational character’ if it engages in business activitiesthrough an affiliate, subsidiary or a controlled undertaking in another country. In the same line, one generally shared view during the first meeting of the OEIWG was that all entities linked to transnational corporations should fall within the subjective scope of a prospective Instrument; this includes subsidiaries and other entities in their supply chain. While it is indisputable that human rights violations may be committed by enterprises whose operations are merely domestic, and that it has been universally accepted that all business enterprises are bound to respect all human rights, the wording of Resolution A/HRC/26/9 indicates that it is concerned with situations where transnational corporations and other entities with transnational activities are capable of evading their human rights’ responsibilities based on jurisdictional grounds.

Moreover, it is also important to make the strategic choices pointed to above while limiting the areas of tension with established principles of international law and established approaches to treaty design. This brief discusses possible selected approaches to addressing States’ obligations under a prospective Instrument.