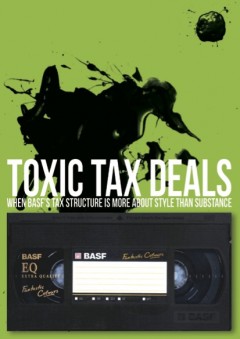 A report published today by the Greens/EFA group in the European Parliament reveals how the German chemical multinational BASF has been avoiding paying taxes in the European Union on a grand scale for years. The company BASF makes targeted use of tax advantages in individual countries, and particularly benefits from tax havens such as Belgium, Malta and the Netherlands. Between 2010 and 2014, BASF henceforth, saved a total of almost one billion euros in taxes. Belgium allows the deduction of notional interest deductions and until recently offered tax relief under its „excess profit tax scheme”. Malta allows for a generous tax exemption of six-sevenths on dividend income. At the centre of BASF’s tax saving scheme are the Netherlands. There, income from licenses and patents is taxed at only 5 percent (patent box) and dividends from intercompany hybrid loans are exempted from any tax – while the associated interest payments in Belgium are fully deductible. Via the Dutch company network profits generated in the EU are redirected to low-tax subsidiaries in Puerto Rico and Switzerland. The Greens / EFA Group has forwarded the study to BASF and called on the company to comment as well as to terminate the tax dumping promptly.

MEP Sven Giegold, financial and economic policy spokesperson of the Greens/EFA group commented on the study as another proof of the urgent need of reforms in EU tax policy:

“BASF has built up a perfidious system to avoid taxes. BASF is operating in the same tax swamp as Apple and IKEA. At the expenses of normal taxpayers, BASF has smuggled 923 million Euros past the tax authorities in Europe. The case of BASF shows that tax avoidance is also widespread among German companies. Tax dumping is not an American but a global problem, paid for by normal taxpayers. Following the case of IKEA, it is now BASF that shows that also industrial companies are capable to build up sophisticated systems to shift their profits in order to avoid paying taxes.

The study verifies that EU measures adopted so far cannot prevent tax avoidance as done by BASF. Tax avoidance schemes such as that of patent boxes in the Netherlands and notional interest deduction in Belgium persist. However, some progress has been made: Only in January the European Commission declared BASF’s “excess profit tax scheme” as illegal state aid. The anti-tax avoidance directive adopted in June will put an end to BASF’s advantages for intracompany hybrid loans in the Netherlands. But: In order to effectively tackle tax avoidance, we need a harmonization of the tax base for company taxation in the European Union. Only with minimum tax rates across Europe we can fight tax competition in an effective and simple manner.

BASF has repeatedly argued against enhanced transparency in the tax system – also in the German Bundestag. It is cristal clear now that BASF has had the intention to preserve their intransparent tax policies through lobbyism. The German government and especially minister of finance Schäuble must now make efforts for enhancing transparency and improving tax legislation. With its resistance against international tax transparency, the German government defends tax avoidance by corporations such as BASF.”