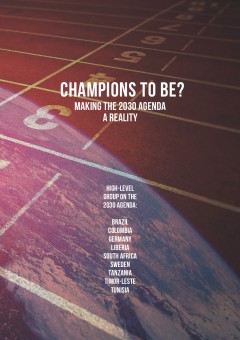 Cover
Making the 2030 Agenda a reality

The 2030 Agenda for Sustainable Development was adopted by world leaders at a United Nations summit on 25 September 2015. It is an ambitious, universal Agenda in which 193 states commit to protecting people and the planet and to ensuring sustainable development in three dimensions – social, economic and environmental – in all parts of the world by 2030. During the summit, the Swedish prime minister and heads of state and government from Brazil, Colombia, Germany, Liberia, South Africa, Tanzania, Timor-Leste and Tunisia set up a High-Level Group (HLG) on the 2030 Agenda. The HLG committed itself to leading efforts to implement the 2030 Agenda globally, at all levels of society. Welcoming this initiative, civil society organizations (CSOs) from the same nine countries have come together in a Civil Society Group on the High-Level Group on the 2030 Agenda, henceforth referred to as “the CSO group”. This group aims to support and collaborate with the members of the HLG in their efforts to ensure political commitment and leadership and to guarantee the participation of civil society in the implementation of the 2030 Agenda. The CSO group also has a watchdog role, to make sure that the nine governments show leadership and become true champions, not only in implementing the Agenda but also in monitoring and reviewing it.

The 2030 Agenda is ambitious, and much is at stake. In just fourteen years’ time, all the goals in the 2030 Agenda must have been met. In most of the nine countries, several good initiatives to start the implementation have been taken, but efforts need to be stepped up if it is going to be possible to achieve the integrated and indivisible goals in the Agenda. Leadership must go well beyond rhetoric in order for the members of the High-Level Group to become the leading examples they have set out to be. The CSO group has therefore prepared this report, which aims to contribute to the High-Level Group’s fulfilment of the commitments made in the 2030 Agenda. The report maps the efforts undertaken by the governments and civil society organizations in each of the nine countries. It highlights what has been achieved to date and indicates what must come next for a successful implementation of the Agenda. It helps foster the exchange of ideas and mutual learning, highlights good practices and challenges, and reveals existing gaps in areas relevant to the implementation of the 2030 Agenda and its 17 Sustainable Development Goals (SDGs). Finally, the report presents twelve key recommendations for governments and CSOs to take action on before July 2017.