Ensuring the Primacy of Human Rights in Trade and Investment Policies 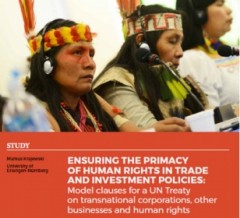 Cover
Model clauses for a UN Treaty on transnational corporations, other businesses and human rights

In October 2017, the third session of the UN intergovernmental working group on transnational corporations, other businesses and human rights will begin negotiations on the draft text for the treaty. With this study, CIDSE and its members seek to present proposals and put forward possible concrete wording for provisions that the treaty could contain, which can serve as a basis for wider discussion.