Financing for Development and the SDGs

An analysis of financial flows, systemic issues and interlinkages 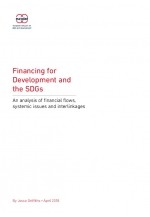 The Sustainable Development Goals (SDGs) are ambitious objectives: not only do they call for an end to poverty and hunger, they also recognise the need to fight inequality, including gender inequality, protect the environment, provide decent work, ensure sustainable consumption and production and achieve global peace. Unlike the Millennium Development Goals that preceded them, they apply equally to all nations.

It is already clear that we are not on track to meet the SDGs. For example, though there has been significant progress in the fight against poverty, this has been slow – very large numbers of people remain in abject poverty, women and girls particularly, and many countries and groups are being left behind. Over 200 million people are unemployed worldwide, and 42 per cent of those that do have jobs work in ‘vulnerable occupations’. Inequality is a defining feature of the global and many national economies: much growth in recent years has directed resources towards the wealthy, and according to International Monetary Fund (IMF) researchers: “the share held by the one per cent wealthiest population is rising at the expense of the bottom 90 per cent population.”

It is clear that significant reforms of the global financial and economic system are needed if the promise of the SDGs is to be met. This paper examines the features of different development financing sources, systemic issues in the global economy and the way it is governed, and sets out a programme of reform for developed country policymakers.