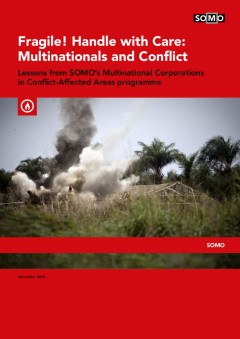 The research challenges the widespread belief that private sector development has a mostly positive influence on peace building and economic reconstruction, and argues that the relationship between the private sector and conflict requires further scrutiny. Many companies – especially so-called “hit and run” companies – operate in conflict-affected areas without making long-term investments, while benefiting from the fragility and the governance gap.

Fragility enables companies to operate without accountability, and to profit from the government’s weak bargaining position. The resulting vicious circle contributes to already fragile situations and can lead to renewed conflict because of grievances among local (often traumatised) populations expecting to benefit from private development. This is compounded by an almost complete lack of access to remedy for victims when human rights abuses take place in conflict-affected areas.

The new report, ‘Fragile! Handle with care: Multinationals and Conflict’, draws lessons from SOMO’s research over the past four years on multinational corporations in conflict-affected areas. It considers research on extractives and agro-industries and their impact on human rights in five countries: Colombia, Democratic Republic of the Congo, Liberia, Sierra Leone and South Sudan. These case studies provide many illustrations of business-related human rights abuses in contexts of conflict and fragility, and valuable lessons on how companies operate in conflict-affected areas.

The report asserts that fragile states’ governments can improve their bargaining position with multinational corporations by building capacity to better negotiate contracts and to assess the long-term implications of companies’ investments, including social cost-benefit analyses. It is also crucial to allow sufficient space for civil society to operate in fragile and conflict-affected areas.

“The space for civil society to hold the private sector accountable is increasingly shrinking, making it more difficult to hold companies accountable,” says SOMO researcher Mark van Dorp. “This is clearly illustrated by our case studies in Liberia and Colombia: human rights defenders that have exposed corporate abuses are being threatened, intimidated and sometimes prosecuted for the simple reason that they are standing up for the rights of people that are being violated as a result of private sector development. The international community should put more pressure on host states and on multinational companies to ensure that human rights are protected, especially in fragile settings.”