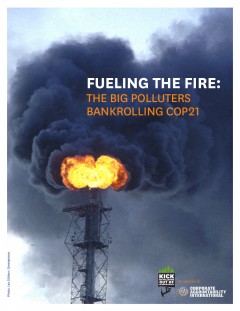 Corporate Accountability International has released a new report, “Fueling the Fire: The big polluters bankrolling COP21,” exposing the filthy track record of the corporations sponsoring the Paris climate talks. With less than one week before the 21st Conference of the Parties (COP21) of the climate treaty, the report pulls back the green veil of four of the meeting’s dirtiest sponsors.

“Fueling the Fire” focuses on the environmental destruction and public policy interference of the leading COP21 sponsors including fossil fuel conglomerates Engie (formerly GDF Suez) and Suez Environnement, as well as global banking giant BNP Paribas and French utility Électricité de France (EDF). By detailing the corporations’ abuses to the environment and aggressive lobbying to undermine environmental policy, the report lays bare the conflict of interest inherent in allowing such sponsorship to exist.

“Inviting some of the world's biggest polluters to pay for the COP is akin to hiring a fox to guard a hen house," said Patti Lynn, executive director of Corporate Accountability International. "We must eliminate this conflict of interest before COPs become corporate tradeshows for false market-based solutions.”

As the report details, COP sponsors have long track records of policy interference that contradict the green PR they advance. For example, while EDF claims to be “committed to a decarbonized world,” it is an active member—alongside ExxonMobil and Shell—of BusinessEurope. On behalf of its members, BusinessEurope, which is a reliable obstructionist of European climate policy, openly opposes the “market deployment of energy produced from renewable sources.”

In addition to anti-climate policy interference, the report exposes the reality behind the green façade advanced by the COP sponsors. Engie, an early sponsor of COP21, is a polluter with few rivals. In 2014, the corporation was directly responsible for more than 131 megatons of greenhouse gas emissions, equivalent to the pollution emitted from driving around the globe 12 million times.

“In Nigeria, the deadly effects of Shell’s unholy alliance with our government has left deep scars on our country.” said Philip Jakpor from Environmental Rights Action/Friends of the Earth Nigeria, a member of the global coalition, “Whether it’s sponsorship or back-door lobbying, we must protect climate policy making from those who wish to undermine it.”

Corporate sponsorship of the treaty meetings is just one example of the many ways in which corporate cooptation of and interference in climate policy has become commonplace. In both the UN Framework Convention on Climate Change (UNFCCC) and in national governments, the fossil fuel industry has inserted itself as a stakeholder in the process in order to drive policymakers toward industry friendly “solutions” and delay or water down policy.

"Despite recent announcements to stop new coal projects, Engie still owns 30 dirty coal power plants worldwide.ÂÂÂÂÂÂÂ Gas and coal are the company’s main energy sources; renewables account for just 4% of its energy mix (excluding large dams)."Célia Gautier, policy advisor atClimate Action Network France,” On top of this, Engie is planning to sell some of its coal power plants instead of closing them down. The French state is directly responsible for Engie's greenwashing activities as it owns 33% of its shares and accepted to put them in their list of COP21 sponsors."

The Lima-Paris Action Agenda (LPAA), a joint project of the Peruvian and French COP presidencies, the Office of the Secretary-General of the United Nations and, the UNFCCC Secretariat, is a series of commitments and initiatives involving more than 1,700 corporations including Shell, Total, ExxonMobil and other big polluters. In Paris, the Secretariat will make the LPAA a primary focus, even folding it into the agenda and formal outcomes of the talks. The project’s “open-door” policy has welcomed the participation of not only the world’s largest fossil fuel corporations, but also corporations involved in coal mining and hydraulic fracturing or “fracking” as well transnational energy utilities.

In May, more than 60 organizations launched a global campaign to kick big polluters out of climate policy. To date, more than half a million people have called for the implementation of existing legal precedents to protect climate policy from the interference of the emissions-intensive industries. The coalition will deliver these demands to the Parties in Paris in a week’s time.

Four of the Paris talks’ corporate sponsors (profiled below) directly own and/or hold investments in some of the most carbon-intensive energy projects in the world, from oil sands in Canada to hydraulic fracturing exploration in the UK and even the Tata Mundra coal-fired power plant in India.

The main takeaway: This conflict of interest ensures it is impossible for these corporations to be meaningful contributors toward sound climate policy. These corporations (and many of the other sponsors) are businesses predicated on the continued and unencumbered extraction of fossil fuels, and massive financial incentive to ensure dysfunction, delay, or redirection of the UNFCCC.

Findings from “Fueling the Fire”:

Recommendation of the report: Protect policymaking! The report calls for the replication for the UNFCCC of an existing UN legal precedent: Article 5.3 of the WHO's Framework Convention on Tobacco Control. The provision has protected national and international-level tobacco control and public health policymaking from the corrosive influence of the tobacco industry for a decade and with great success--implementation of this and other substantive measures of the treaty is rapidly expanding and nearly 90% of the world's population is covered by it.