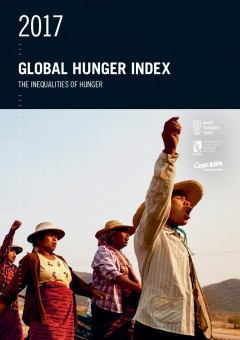 The 2017 Global Hunger Index (GHI) shows long-term progress in reducing hunger in the world. The advances have been uneven, however, with millions of people still experiencing chronic hunger and many places suffering acute food crises and even famine.

According to 2017 GHI scores, the level of hunger in the world has decreased by 27 percent from the 2000 level. Of the 119 countries assessed in this year’s report, one falls in the extremely alarming range on the GHI Severity Scale; 7 fall in the alarming range; 44 in the serious range; and 24 in the moderate range. Only 43 countries have scores in the low range. In addition, 9 of the 13 countries that lack sufficient data for calculating 2017 GHI scores still raise significant concern, including Somalia, South Sudan, and Syria.

To capture the multidimensional nature of hunger, GHI scores are based on four component indicators—undernourishment, child wasting, child stunting, and child mortality. The 27 percent improvement noted above reflects progress in each of these indicators according to the latest data from 2012–2016 for countries in the GHI:

The share of the overall population that is undernourished is 13.0 percent, down from 18.2 percent in 2000.

In this year’s essay, Naomi Hossain, research fellow at the Institute of Development Studies, explores the nexus of inequality, power, and hunger. Most often, it is the people or groups with the least social, economic, or political power—those who are discriminated against or disadvantaged, including women, ethnic minorities, indigenous peoples, rural dwellers, and the poor—who suffer from hunger and malnutrition. They are affected by food and agricultural policies, but have little voice in policy debates dominated by governments, corporations, and international organizations. Analyzing the role that power plays in creating such inequalities in the food system and allowing space for all citizens—especially the least advantaged—to participate in decision making will help address nutritional inequalities.

The 2017 Global Hunger Index therefore presents recommendations that aim to redress such power imbalances, as well as the laws, policies, attitudes, and practices that exacerbate and perpetuate them, in order to alleviate hunger among the most vulnerable. National governments, the private sector, civil society, and international organizations must all act now to reduce inequalities if Zero Hunger is to be reached by 2030.