Information for the nations 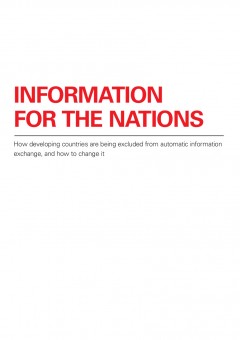 Cover
How developing countries are being excluded from automatic information exchange, and how to change it

Era of bank secrecy still far from over for developing countries

G20 Finance Ministers meeting in Istanbul this weekend still have much to do if the claim ‘the era of bank secrecy is over’ is to mean anything in developing counties.

In a new report from Christian Aid, endorsed by 18 other civil society organisations, the flaws in the current approach of the G20 towards automatic exchange of tax information are laid bare.

Joseph Stead, Christian Aid’s senior economic justice advisers said today: “There remain loopholes in the standards that will limit the impact in all countries, but for developing countries there are some specific challenges that remain, despite the promises of the G20 to take action.

“It’s estimated that 33 per cent of African and Middle East-owned assets are held offshore compared to 6 per cent of European-owned assets. This suggests tax evasion on a significant scale.

“If the tax authorities in African countries had access to information about the true ownership of those off shore assets, they could raise revenue to fight poverty, but sadly automatic information exchange looks some way off.

“The G20 and the 122 member jurisdictions of the OECD-dominated Global Forum on Transparency and Exchange of Information for Tax Purposes, to which the EU is also signed up,  continue to insist that developing countries put in place all the systems and processes to send information on assets held in their financial institutions before they can receive anything in return.

“Not only is this difficult for countries with limited resources, it is likely to be of little benefit to developed countries, very few people are believed to be hiding their cash in developing countries.”

The new report, Information for the Nations, recommends that Low and Lower-Middle Income Countries be given a limited period where they can receive information, before the requirement to reciprocate is enforced.

This idea appeared to be endorsed last week by the African Union report on Illicit Financial Flows, which called for common but differentiated responsibilities in Automatic Exchange of Information.

Information for the Nations also highlights the fact that although automatic exchange of information is supposed to be a multilateral process, there is a loophole that some tax havens have made it clear that they will use to demand a separate agreement with every country with which they are prepared to share information.

“Countries such as Switzerland and the Bahamas have shown no qualms at indicating they will only agree to information exchange with countries that have the political and economic power to make them,” said Mr Stead. “Very few developing countries will be on that list.

“Events are moving incredibly quickly in the world of Automatic Exchange of Information, faster than almost anyone believed, but developing countries should not be left behind. The key test will be ensuring all countries, not just the rich ones, benefit.”