Inside Job: Big Polluters' lobbyists on the inside at the UNFCCC 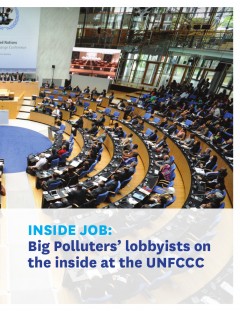 Inside Job: Big Polluters' lobbyists on the inside at the UNFCCC

Corporate Accountability International released a new report “Inside Job: Big Polluters’ lobbyists on the inside at the UNFCCC,” exposing the dirty fossil fuel trade associations that are stalking the halls of the U.N. climate talks to undermine, weaken, and block progress.

The report was released just one week before governments convene in Bonn, Germany to continue negotiations on the United Nations Framework Convention on Climate Change (UNFCCC). Governments will, for the first time in history, officially discuss conflicts of interest at this convening. The meetings in Bonn will also be the first for the U.S.’ Trump administration, whose State Department is now led by former Exxon Mobil CEO Rex Tillerson. This has further raised the specter of conflicts of interest in government and at the talks.

“Right now hundreds of business trade associations have access to the climate talks, and many of them are funded by some of the world’s biggest polluters and climate change deniers,” said International Policy Director Tamar Lawrence-Samuel with Corporate Accountability International. “With so many arsonists in the fire department, it’s no wonder we’ve failed to put the fire out.”

The report peels back the curtain on just six of the more than 270 Business/Industry NGOs non-governmental organizations (BINGOs) currently admitted to the climate talks: U.S. Chamber of Commerce, National Mining Association, Business Roundtable, FuelsEurope, Business Council of Australia, and International Chamber of Commerce.

Many of these groups were exposed for their myriad fossil fuel industry connections in an analysis produced by Corporate Accountability International prior to the Marrakech climate talks in 2016. This report expands on that body of evidence, uncovering not just the BINGOs’ connections to the fossil fuel industry, but also the actions these groups have taken themselves to weaken, slow, or block climate policy, exposing their duplicity at the talks.

The report and discussion in Bonn build on the Kick Big Polluters Out campaign—a years-long movement of civil society groups and hundreds of thousands of people across the world demanding climate policy be protected from fossil fuel industry interference. Currently, there are no policies in place to protect against organizations intent on derailing the process, such as the U.S. Chamber of Commerce and Business Council of Australia.

Recently, the campaign has coalesced around a movement of governments representing nearly 70 percent of the world’s population that, last May in Bonn, called for the UNFCCC to address conflicts of interest. The proposal was met with fervent opposition from some of the world’s biggest historical emitters, including the United States, European Union, and Australia. And at the Marrakech talks in November, environmental groups confronted the U.S. delegation and delivered the call to kick big polluters out of the talks from more than half a million people, with an additional 75,000 calling for the U.S. delegation to support the policy or step aside.

Governments are looking to the precedent set in the global tobacco treaty. Both its key provision, Article 5.3, and the guidelines for implementation of Article 5.3 protect against classic industry interference tactics by barring partnerships, financial relationships, revolving door cases, and industry participation in the policymaking process. These provisions have been recognized by World Health Organization Director-General Margaret Chan as the single largest catalyst of progress in a treaty that could save 200 million lives by 2050 when fully implemented.

The conflict of interest discussion will take place at Bonn during an in-session workshop on enhancing the participation of observer organizations, organized by the UNFCCC secretariat.