N2Africa, the Gates Foundation and Legume Commercialisation in Africa 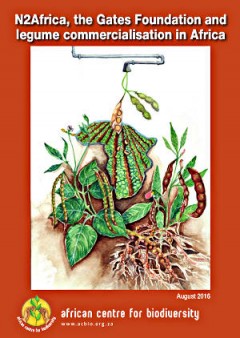 Legumes have a long history of use in African food and agriculture, including a number of indigenous crops. They have important soil health and nutritional benefits and currently are mostly produced under the control of women. The United Nations declared 2016 the International Year of Pulses (which includes grain legumes) in recognition of the value of legume crops.

Until very recently, Green Revolution proponents treated legumes as a marginal crop with limited commercial value. There were historically some programmes to develop improved, certified legume varieties mostly through public sector breeding research and development. But after structural adjustment most of these programmes were reduced or closed down. With the renewed focus on African agricultural modernisation from the mid-2000s, legume programmes were resuscitated, but in the form of public-private partnerships (PPPs) with the objective of commercialising development and production of legumes, especially soya and common beans with the greatest commercial potential. This was especially related to anticipated animal feed demand as governments began to emphasise the development of commercial, large-scale poultry and other livestock sectors. N2Africa is one such programme.

Although the soil health and nutritional benefits are used to justify investment in legume commercialisation, the real baseline measurement is production for these external markets. As a result, local legume crops and varieties are bypassed in favour of varieties developed for industrial feed and processing markets and brought in from outside. These may displace local varieties that farmers prefer for domestic consumption and sale into local markets.There is an underlying concern about privatisation of ownership of improved, certified varieties in PPPs. With growing recognition of the limits of synthetic fertiliser use and the long-term damage to soil health, control over legumes as nitrogen fixers becomes a commercial advantage. As with other Green Revolution interventions, public resources are channelled to setting the system up for later private expropriation.

N2Africa is considered through these lenses. N2Africa has three focus areas: legume variety R&D, release and deployment; introduction and promotion of commercial inoculants and synthetic fertilisers; and market development and integration of smallholder farmers into commercial legume markets as the basis of sustainability. In reality, commercial markets remain small and market demand is based more on targets and expected demand than on real demand. Smallholder farmers producing for these markets seldom gain a significant share of value added.

N2Africa could promote alternative ways of integrating legumes into agricultural systems, for example agroforestry or improved fallow or green manure. But the focus is on grain legumes only. With regard to increased soil fertility, grain legumes are not the best option because a lot of the fixed nitrogen is harvested with the high protein content grains.

While we can recognise the potentially valuable technical and organisational contributions of such efforts, currently they are oriented exclusively to supporting a modernisation agenda that can only benefit a thin layer of the continents millions of smallholder farmers. A legume development programme that integrates farmers into seed enhancement and production, and develops contextually appropriate quality control systems based on farmer priorities and under the control of farmers, could offer a more sustainable and inclusive approach than a private sector, profit-driven approach.