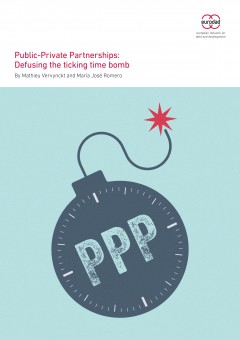 Public-private partnerships (PPPs) are increasingly being promoted as a way to finance development projects. To pave the way for PPPs, donor governments and financial institutions have set up multiple donor initiatives to promote changes in national regulatory frameworks, to provide advice and to finance PPP projects. In particular the World Bank Group (WBG) has played a leading role in shaping the rules in developing countries which allow PPPs to flourish, and has increased its support to PPPs more than threefold, from US$0.9 billion to US$2.9 billion, over the period 2002-2012.

Since 2004 there has been a rapid growth in the value of PPPs in the developing world. Over an eight-year period, investments through PPPs increased by a factor of six: from US$25 billion to US$164 billion. After that the trend has been volatile. Although investment in PPPs fell in 2013, they continued to increase in 2014 and in 2015 (U$S104 and U$S118 billion respectively). 2016 saw another decrease to U$S70 billion due to declining investment in developing markets. But increased efforts by MDBs to leverage private financing in both emerging and low income economies indicate a more determined push to reduce the risk for private sector investors to come in.

This briefing builds on Eurodad’s previous work on PPPs, including the major 2015 report What lies beneath, but focuses specifically on the costs to the public purse of PPPs, and why bad practices generate a false and damaging incentive in favour of the mechanism. It also highlights the powerful role of the WBG in incentivising PPPs, which can be extremely problematic, especially when countries are not adequately alerted to the fiscal risks of PPPs and how to manage them properly. Until the real costs are transparently reported and used to make sensible decisions about whether to use a PPP or a different option to deliver public services, PPPs will continue to be highly problematic.