Unhappy Meal: €1 Billion in Tax Avoidance on the Menu at McDonald’s 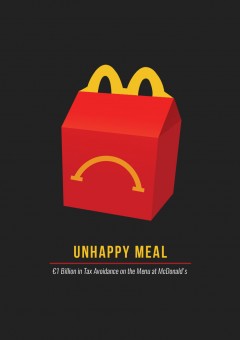 Cover
Tax structure allowed McDonald’s to divert revenue for years, costing European countries over €1 billion in lost taxes between 2009 and 2013.

On February 25, 2015, in Brussels, a coalition of European and American trade unions, joined by anti-poverty campaign group War on Want, unveiled a report about what they say is McDonald’s deliberate avoidance of over €1 billion in corporate taxes in Europe over the five year period, 2009-2013.

The report outlines in detail an alleged tax avoidance strategy adopted by McDonald’s and its tax impact both throughout Europe and in major markets like France, Italy, Spain and the U.K. The practice, the coalition says, essentially consisted of moving the European headquarters from the UK to Switzerland as well as using intra-group royalty payments and channeling them into a tiny Luxembourg based subsidiary with a Swiss branch.

Between 2009 and 2013, the Luxembourg-based structure, which employs 13 people, registered a cumulative revenue of €3,7 billion, on which it reported a meager €16 million in tax.

“It is shameful to see that a multibillion euro company, that pays low wages to its workforce, still seeks to avoid its responsibility to pay its fair share of much needed taxes to finance public services we all rely on. Rather than supersizing profits and minimising taxes, McDonald’s should change its recipes to ensure that Corporate Citizenship is at the core of its menu,” said EPSU General Secretary Jan Willem Goudriaan. “We call on the European Commission and respective national tax authorities, as well as the European Parliament’s newly formed Special Committee on Tax Ruling, to look closely into McDonald’s tax practices and take appropriate measures.”

This report is co-authored by EPSU, EFFAT, and SEIU– a coalition of European and American trade unions, representing 15 million workers in different sectors of the economy across almost 40 countries - as well as UK-based campaign group War on Want.

McDonald’s has faced widespread criticism in Europe and globally for the low wages and poor working conditions at its restaurants. In the U.K., for example, workers have protested McDonald’s practice of “zero-hours contracts”, which leaves workers without any guarantee of regular work or stable income. The company’s low wages have also been criticized for imposing substantial costs on taxpayers, as many McDonald’s workers are forced to rely on public assistance to afford food and rent.

McDonald’s is the largest fast food company in Europe, with 7,850 stores and €20.3 billion in systemwide sales in 2013. McDonald’s European division accounts for nearly 40 percent of the company’s operating income.

Details of the report will be presented to Members of the European Parliament, Commission officials as well as to the European Commission’s platform for tax good governance.