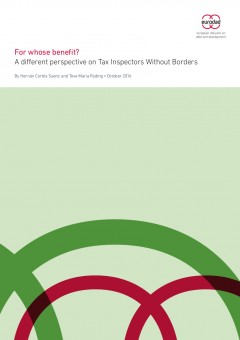 Cover
A different perspective on Tax Inspectors Without Borders

Taxation of multinational corporations is of utmost importance to developing countries, which on average generate around 10% of government revenues from this source. However, there are clear indications that the current international system is not working. One type of tax avoidance alone is currently costing developing countries between $70 billion and $120 billion per year. While often considered highly immoral, such international tax avoidance is often, technically speaking, legal.

One of the solutions proposed to developing countries to increase their capacity to collect taxes from MNCs’ activities in their territory is the offer of ‘capacity development’ and ‘technical assistance’ on taxation. While there is broad agreement that this is important and urgent, questions arise about how capacity development and technical assistance should be carried out. In particular, the importance of respecting the principles of aid effectiveness and avoiding conflicts of interest between the providers and recipients are central issues.

The Tax Inspectors Without Borders (TWIB) initiative was launched in 2013 as a pilot project by the Organisation for Economic Development and Cooperation (OECD) – also known as the ‘Rich Countries’ Club’. In 2015, the United Nations Development Programme (UNDP) joined the initiative, which is now jointly managed by the OECD and UNDP. One of the special features of the initiative is that it entails a deployment of foreign experts directly into the tax administrations of developing countries – an area that is highly sensitive.

However, the outcome of the TIWB pilot phase has not been thoroughly analysed or discussed, and while the initiative has been widely communicated through the media, the amount of publicly available information about the actual content and experiences of TIWB is extremely limited.

This report looks at the current design of TIWB, as well as three TIWB pilots which have taken place between the UK and Rwanda; the Netherlands and Ghana; and France and Senegal, respectively. It looks at official information available about TIWB and draws on interviews with experts. However, since it has not been possible to access detailed information about the TIWB pilot phase through public sources, this report has also drawn on internal unpublished OECD documents, with the aim of shedding new light on the issue.

The main findings are as follows: