The "A" Word: Monitoring the SDGs 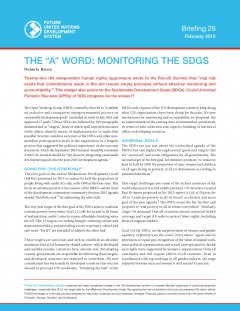 Twenty-two UN independent human rights rapporteurs wrote to the Rio+20 Summit that “real risk exists that commitments made in Rio will remain empty promises without effective monitoring and accountability.” * This danger also exists for the Sustainable Development Goals (SDGs).

Could Universal Periodic Reviews (UPRs) of SDG progress be the answer?

Going for the Other Half
The first goal of the earlier MDGs promised by 2015 to reduce by half the proportion of people living with under $1 a day, with 1990 as the base year. For most of the development cooperation community the post-2015 age should “finish the task” by addressing the other half.

The very first target of the first goal of the SDGs (according to the 17 goals and 169 targets of the July 2014 Outcome Document produced by the Open Working Group) aims to eradicate extreme poverty everywhere. The 13 targets on ending hunger, reducing infant and maternal mortality, and providing access to primary school and safe water “for all”, are intended to address the other half. These targets are universal and seek to establish an absolute minimum that all of humanity should achieve, which developed and most middle-income countries have already met.

Developing country governments are responsible for delivering those targets, and developed countries are expected to contribute. No new commitment has been made by developed countries that was not already in previous UN resolutions. “Finishing the task” of the MDGs only requires of the UN development system to keep doing what UN organizations have been doing for decades.
No new mechanisms for monitoring and accountability are proposed, but an improvement of the existing ones recommended.

Universal Goals
The SDGs are not just about the unfinished agenda of the MDGs but aim higher through several goals and targets that are “universal” and create obligations for all governments, including in some of the richest countries of the world where poverty is still widely prevalent.

UN Secretary-General Ban Ki-moon proposed in his 2013 report A Life of Dignity for All to “eradicate poverty in all its forms” as the first and main goal of the new agenda. The OWG raises the bar further and proposes to “end poverty in all its forms everywhere.” Over 70 of the 169 targets request developed, middle income, and transition countries to take action domestically, in addition to supporting the efforts of poorer countries.

The issue is so sensitive that what is now whispered in UN corridors—the “A word” for “accountability”—has been dropped from all drafts and replaced by a vaguer “review mechanism.” In fact, many of the targets are essentially impossible to assess quantitatively because they refer to concepts for which there are no indicators or no internationally agreed definition. Such is the case of practically all of Goal 16 (“governance”), most of the “environmental goals” (11 to 15), and some key aspects of others, such as target 10.7 on migration and mobility.

The targets that can be monitored, quantitatively or qualitatively, can be grouped into three categories: for developing countries (in particular, the least developed); for all countries; and for exclusively or mainly developed countries.

The first group was described above as “finish-the-MDGs” targets, aiming at the eradication of extreme poverty and achieving a minimum social standard. The UN development system has been monitoring such targets for decades, and there is wide consensus on methodology. The challenge is the absence of accurate and updated statistics, which underlines the logic of strengthening the data collection and processing capacity of developing countries (target 17.18).

When it comes to social targets to be met by all countries, such as halving poverty according to domestic standards or ensuring universal access to health services and full employment, data is not the main challenge. The issue is not monitoring but the “A” word: who is going to report to whom?

Monitoring Goal 8 of the MDGs (the single goal specifically calling upon developed countries to make the other seven achievable) was never an easy task. The SDGs make the task easier by spelling out more clearly what is required, and target 17.2 explicitly demands developed countries “to implement fully their ODA commitments, including to provide 0.7% of gross national income in ODA to developing countries, of which 0.15-0.20 to least developed countries.”

Who is to Monitor and How?
National reporting to any international body on domestic progress towards the SDGs will be voluntary. Governments are primarily responsible to their own citizens through oversight bodies such as parliaments, and so it will be up to civil society to demand and promote regular reporting on national progress.

This approach is consistent with a wealth of experience in making governments accountable for their human rights obligations through Universal Periodic Reviews, which involve: national and international human rights groups and their networks; women’s groups; issue-based organizations such as those organized through Global Health Watch or the International Council on Adult Education, as well as cross-issue monitoring efforts such as those by LDC Watch, or Social Watch.

Actually, some targets can only be monitored at the national level. For example, target 10.3 commits governments to “ensure equal opportunity and reduce inequalities of outcome, including through eliminating discriminatory laws, policies, and practices and promoting appropriate legislation, policies, and actions in this regard.” Most of the specifics have no agreed international definition or indicators to allow comparison across countries.

By moving from a request of “equal opportunities” to an endorsement of the concept of “inequalities of outcome,” the SDGs are helping the cause of social justice everywhere. The UN can encourage national level reporting by helping to define standards, building capacities, and providing for adequate peer review.

In promoting accountability by developed and middle-income countries, the UN development system should draw from the experiences of UPRs in the human rights field. An extended Post-2015 UPR, complementary to the existing one, could be adopted to encompass the SDGs. The High-level Political Forum (HLPF, created at the Rio+20 Summit to replace the Commission on Sustainable Development) could be the appropriate body to implement the Post-2015 UPR and make it a meaningful body.

Monitoring Non-Transparant "Partnerships"
Finally, in implementing the SDGs, there is growing pressure to refer to “partnerships” of different kinds among governments, the corporate sector, and civil society. Ban Ki-moon’s December 2014 “synthesis report” on the post-2015 development agenda includes a graph on “flow of funds to sustainable development” that has “blended institutions” at its center, exemplified by “innovative partnerships.” Public-private partnerships (PPP) and guarantees are identified as the key “instruments” of these “blended institutions.”

Such an endorsement of PPPs comes at a moment when World Bank experts are criticizing this model of procurement for its lack of transparency and the implicit tendency to overspend that seems inherent in what ultimately acts as a “buy-now-pay-later” formula.

“Multi-stakeholder partnerships” are the subject of two vague targets under goal 17 regarding the means of implementation and revitalizing “the global partnership for sustainable development finance.” The secretary-general proposes “principled and responsible public-private-people partnerships”, and adds that “mutual accountability is critical.”

Mutual accountability is enshrined in the Paris Declaration on Aid Effectiveness and refers to a relationship between donor and “partner” governments. In a more complex partnership, involving corporations and civil society as well, it is unclear how to understand “mutual” because governments should be accountable to their citizens but certainly not to corporations. Undermining accountable and transparent multilateralism is a risk of such partnerships, argues the Civil Society Reflection Group on Global Development Perspectives.

Conclusions
The analysis of the SDGs in this Briefing, and the need to ensure independent monitoring and accountability, lead to the following five suggestions:

1.       Monitoring and review (accountability) mechanisms are part of the “package” of a new sustainable development agenda and should be adequate to the aspirations and specific responsibilities and all actors.

2.       If the corporate sector is to have a substantial role in the implementation, ex ante criteria and accountability mechanisms should be agreed to counter the risks associated with such partnerships.

3.       Since national governments have a predominant and nontransferable responsibility in implementation, accountability to their own citizens is key and the role of civil society in this regard is essential.

4.       Since developed countries have specific responsibilities in the SDGs, both in providing means of implementation as well as in leading transformations in global production and consumption patterns, the monitoring and accountability of developed country policies is key to the success of the new development agenda.

5.       In view of increasing trans-boundary impacts of national policies, particularly of the most powerful countries, and of the need for international action to meet the SDGs, strong international review mechanisms are necessary, which can be modelled on the UPRs for human rights. Since sustainable development is multi-sectoral, such reviews will require the United Nations to convene the highest level of political decision-making of all key global institutions.

*“Rio+20: No Global Goals without Accountability—An Open Appeal from over 20 UN Experts,” http://www.ohchr.org/EN/HRBodies/SP/Pages/OpenLetterRio20.aspx

Roberto Bissio is Executive Director of the Third World Institute and coordinates the secretariat of Social Watch. He serves as adviser to the Enhancing ICANN Accountability Process. Previously, he was a member of UNDP’s Civil Society Advisory Group and has served on the board of the Women’s Environment and Development Organization and the Montreal International Forum. As a journalist and columnist, he has written extensively about a range of development issues.