Corporate accountability: What’s gender got to do with it?

Corporate accountability: What’s gender got to do with it? 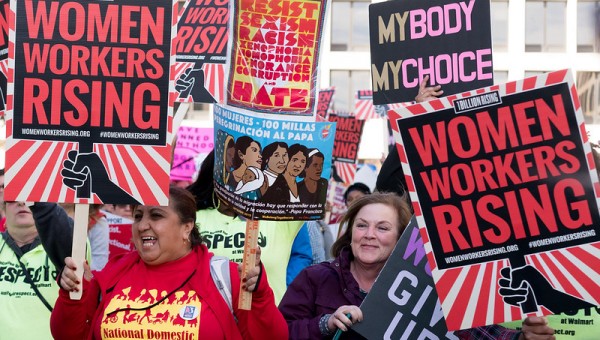 When the President of the European Commission, Ursula von der Leyen, ceremoniously launched the Gender Equality Strategy: Striving for a Union of Equality last March, she declared that “gender equality is a core principle of the European Union, but it is not yet a reality.”

This much-anticipated strategy planned to integrate a gender perspective in all EU policies and global actions, with a focus on promoting women’s rights and tackling gender-based violence. It sounds promising enough, but will it also apply to women producing our clothes, food and electronics?

It is by lucky coincidence that on this year’s International Women’s Day, the European Parliament will be debating, and later voting on, a key legislative proposal on corporate accountability aimed at legally requiring companies to identify, asses, prevent, mitigate, and address their adverse impacts on human rights, the environment and good governance in their global value chains.

Because these impacts are not gender-neutral, this vote could be a crucial steppingstone in protecting women who are disproportionately affected by corporate abuse, from savage working hours to unpaid sick days to harassment by supervisors.

The corporate push to drive down prices is squeezing workers, especially women, every sector and particularly in the lower tiers of business operations. According to Oxfam, 60 percent of young women in China’s Guangdong garment industry have no written contract and 90 percent have no access to social insurance.

In agro-industrial farms throughout Latin America and West Africa, women face discrimination and are denied the right to organise into trade unions that would better protect them from unfair dismissals due to pregnancy or advocate against the use of toxic agrochemicals. From citrus farms to vineyards, women workers report having no paid maternity leave and protections.

Beyond labour abuses and discrimination, the extractive sector is particularly devastating for women. Women’s land, food, housing and cultural rights are under attack by business-driven pollution, land grabbing, and natural resource degradation. This results in forced displacement, loss of livelihood and community discord.

But by far the most globally widespread form of corporate abuse that women experience is gender-based violence, in particular sexual violence. Women in global value chains are exposed to precarious working conditions where men in positions of power try to assert control over women workers.

Fewer job opportunities, limited labour mobility and corporate indifference create a breeding ground for unwelcome, humiliating, and sometimes fatal conduct. Earlier this year, 20-year old Jeyasre Kathiravel was raped and murdered by her supervisor at an H&M supplier factory after months of harassment on the factory floor.

Women from local, indigenous and marginalised communities can also become a target. At least 331 environmental, land and human rights defenders were murdered in 2020, of which 13% were women and six were transgender. Yet, women activists experience gendered attacks, such as harassment, smear campaigns, black mailing, and sexual assault to intimidate and silence them for resisting mining and agribusiness projects.

Tuesday marked five years since the murder of prominent Honduran environmental activist Berta Cáceres, who was a vocal opponent of the Agua Zarca hydroelectric dam project that was threatening a river considered sacred by her community. Two European financial institutions were implicated in financing this project – the Dutch Development Finance Institution and the Finnish Development Finance Institution. When they were made aware of the human rights violations linked to the construction of the dam, they turned a blind eye.

Despite this pattern of poverty wages, harassment, and injustice, no European company is legally obliged to check whether they are complicit in human rights abuses.

To make matters worse, women – who are over-represented in export-orientated manufacturing sectors – have been particularly hit by the breakdown of global value chains resulting from the spread of the COVID-19 virus. Workers supplying top European retail brands went hungry due to cancelled or unpaid orders.

Where the legal system is frail or corrupt, women have little chance to demand justice from powerful corporations. Existing gender inequalities and patriarchal norms, coupled with practical and legal barriers, make it difficult to bring cases to European courts.

But the EU now has an opportunity to turn its rhetoric on the “union of equality” into strong rules that will finally put respect for women’s rights above narrow economic interests.

A gender-responsive corporate accountability law would require companies to provide adequate living wages, offer social security, actively promote freedom of associ­ation and collective bargaining, ensure the safe participation of women in consultations, and protect the sexual and reproductive health and rights of workers.

The case of the two European banks financing human rights violations that led to the death of Berta Cáceres shows that we urgently need legally binding norms to hold corporations, including financial institutions, to account for their adverse impacts.

Similarly, the case of Jeyasre Kathiravel demonstrates that companies like H&M must be legally compelled to provide women with information on their rights and to support those who have experienced workplace harassment and violence with legal aid and advice.

Any future EU law will fall by the wayside if it doesn’t integrate the UN Convention on the Elimination of all Forms of Discrimination Against Women or treat gender equality as a cross-cutting issue.

These new rules for corporations will not be a silver bullet, but if done right, they will be an important steppingstone in making global supply chains gender-just.