An Action Plan Without Much Action 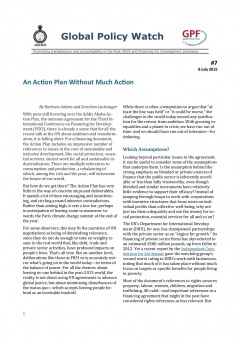 With pens still hovering over the Addis Ababa Action Plan, the outcome agreement for the Third International Conference on Financing for Development (FfD3), there is already a sense that for all the recent talk at the UN about ambition and transformation, it is falling short. For a financing document, the Action Plan includes an impressive number of references to issues at the core of sustainable and inclusive development, like social protection, essential services, decent work for all and sustainable industrialization. There are multiple references to consumption and production, a rebalancing of which, among the rich and the poor, will determine the future of our world.

But how do we get there? The Action Plan has very little in the way of concrete steps and deliverables. It spends a lot of time encouraging and incentivizing, and circling around inherent contradictions. Rather than aiming high, it sets a low bar, perhaps in anticipation of leaving room to maneuver towards the Paris climate change summit at the end of the year.

For some observers, this may fit the narrative of UN negotiations as being of diminishing relevance, since they do not do enough to take on weighty issues in the real world that, like debt, trade and private sector activities, have profound impacts on people’s lives. That’s all true. But on another level, deliberations like those at FfD3 very accurately mirror what’s going on in the world today—in terms of the balance of power. For all the rhetoric about leaving no one behind in the post-2015 world, the reality is not about using UN agreements to advance global justice, but about minimizing disturbances of the status quo—which accepts leaving people behind as an inevitable tradeoff.

While there is often a temptation to argue that “at least the line was held” or “it could be worse,” the challenges in the world today exceed any justification for the retreat from ambition. With growing inequalities and a planet in crisis, we have run out of time–and we should have run out of tolerance—for tinkering.