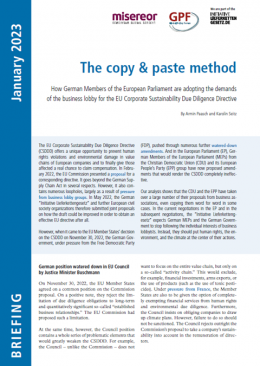 The EU Corporate Sustainability Due Diligence Directive (CSDDD) offers a unique opportunity to prevent human rights violations and environmental damage in value chains of European companies and to finally give those affected a real chance to claim compensation. In February 2022, the EU Commission presented a proposal for a corresponding directive. It goes beyond the German Supply Chain Act in several respects. However, it also contains numerous loopholes, largely as a result of pressure from business lobby groups. In May 2022, the German “Initiative Lieferkettengesetz” and further European civil society organizations therefore submitted joint proposals on how the draft could be improved in order to obtain an effective EU directive after all.

However, when it came to the EU Member States' decision on the CSDDD on November 30, 2022, the German Government, under pressure from the Free Democratic Party (FDP), pushed through numerous further watered-down amendments. And in the European Parliament (EP), German Members of the European Parliament (MEPs) from the Christian Democratic Union (CDU) and its European People's Party (EPP) group have now proposed amendments that would render the CSDDD completely ineffective.

Our analysis shows that the CDU and the EPP have taken over a large number of their proposals from business associations, even copying them word for word in some cases. In the current negotiations in the EP and in the subsequent negotiations, the “Initiative Lieferkettengesetz” expects German MEPs and the German Government to stop following the individual interests of business lobbyists. Instead, they should put human rights, the environment, and the climate at the center of their actions.

By Armin Paasch and Karolin Seitz