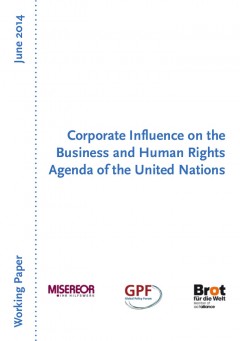 Efforts to create an international legally binding instrument to hold transnational corporations accountable for human rights abuses have recently gained new momentum. In September 2013 the Government of Ecuador delivered a statement on behalf of 85 member states of the UN at the Human Rights Council asking for a legally binding framework to regulate the activities of transnational corporations. Many civil society organizations called on the Human Rights Council to take steps towards the elaboration of a binding Treaty on Business and Human Rights.

All these efforts met with vigorous opposition from TNCs and their business associations, and they ultimately failed. At the same time, corporate actors have been extremely successful in implementing public relations strategies that have helped to present business enterprises as good corporate citizens seeking dialogue with Governments, the UN and decent concerned ‘stakeholders’, and able to implement environment, social and human rights standards through voluntary Corporate Social Responsibility (CSR) initiatives.

The UN Global Compact and the UN Guiding Principles on Business and Human Rights became prime examples of an allegedly pragmatic approach based on consensus, dialogue and partnership with the corporate sector – in contrast to regulatory approaches to hold corporations accountable.

The working paper gives an overview of the debate from the early efforts to formulate the UN Code of Conduct to the current initiative for a binding Treaty on Business and Human Rights. It particularly focuses on the responses by TNCs and their leading interest groups to the various UN initiatives, specifies the key actors and their objectives. In this context it also highlights features of the interplay between business demands and the evolution of the regulatory debates at the UN. This provides an indication of the degree of influence that corporate actors exert and their ability – in cooperation with some powerful UN member states – to prevent international binding rules for TNCs at the UN.

The working paper ends with remarks on what could be done to counteract and reverse corporate influence on the UN human rights agenda. This constitutes an indispensable prerequisite for progress towards effective legally binding instruments on business and human rights.