Eradicating poverty and promoting prosperity in a changing world - A false start? 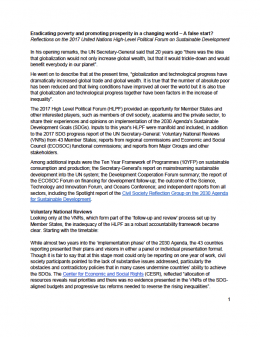 In his opening remarks, the UN Secretary-General said that 20 years ago “there was the idea that globalization would not only increase global wealth, but that it would trickle-down and would benefit everybody in our planet”.

He went on to describe that at the present time, “globalization and technological progress have dramatically increased global trade and global wealth. It is true that the number of absolute poor has been reduced and that living conditions have improved all over the world but it is also true that globalization and technological progress together have been factors in the increase of inequality”.

The 2017 High Level Political Forum (HLPF) provided an opportunity for Member States and other interested players, such as members of civil society, academia and the private sector, to share their experiences and opinions on implementation of the 2030 Agenda’s Sustainable Development Goals (SDGs). Inputs to this year’s HLPF were manifold and included, in addition to the 2017 SDG progress report of the UN Secretary-General: Voluntary National Reviews (VNRs) from 43 Member States; reports from regional commissions and Economic and Social Council (ECOSOC) functional commissions; and reports from Major Groups and other stakeholders.