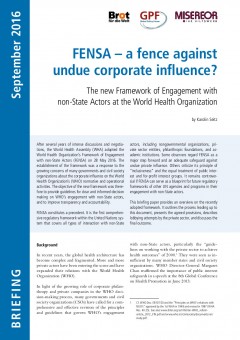 After several years of intense discussions and negotiations, the World Health Assembly (WHA) adopted the World Health Organization’s Framework of Engagement with non-State Actors (FENSA) on 28 May 2016. The establishment of the framework was a response to the growing concerns of many governments and civil society organizations about the corporate influence on the World Health Organization’s (WHO) normative and operational activities. The objective of the new framework was therefore to provide guidelines for clear and informed decision making on WHO’s engagement with non-State actors, and to improve transparency and accountability.

FENSA constitutes a precedent. It is the first comprehensive regulatory framework within the United Nations system that covers all types of interaction with non-State actors, including nongovernmental organizations, private sector entities, philanthropic foundations, and academic institutions. Some observers regard FENSA as a major step forward and an adequate safeguard against undue private influence. Others criticize its principle of “inclusiveness” and the equal treatment of public interest and for-profit interest groups. It remains controversial if FENSA can serve as a blueprint for future regulatory frameworks of other UN agencies and programs in their engagement with non-State actors.

This briefing paper provides an overview on the recently adopted framework. It outlines the process leading up to this document, presents the agreed provisions, describes lobbying attempts by the private sector, and discusses the final outcome.