Financing for Development- stock-taking at the UN| Part 2 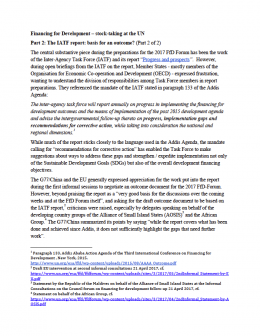 Cover Financing for Development- stock-taking at the UN| Part 2

The central substantive piece during the preparations for the 2017 FfD Forum has been the work of the Inter-Agency Task Force (IATF) and its report “Progress and prospects”.  However, during open briefings from the IATF on the report, Member States – mostly members of the Organisation for Economic Co-operation and Development (OECD) – expressed frustration, wanting to understand the division of responsibilities among Task Force members in report preparations. They referenced the mandate of the IATF stated in paragraph 133 of the Addis Agenda:

The inter-agency task force will report annually on progress in implementing the financing for development outcomes and the means of implementation of the post 2015 development agenda and advise the intergovernmental follow-up thereto on progress, implementation gaps and recommendations for corrective action, while taking into consideration the national and regional dimensions.

While much of the report sticks closely to the language used in the Addis Agenda, the mandate calling for “recommendations for corrective action” has enabled the Task Force to make suggestions about ways to address these gaps and strengthen / expedite implementation not only of the Sustainable Development Goals (SDGs) but also of the overall development financing objectives.