Fit for Whose Purpose? 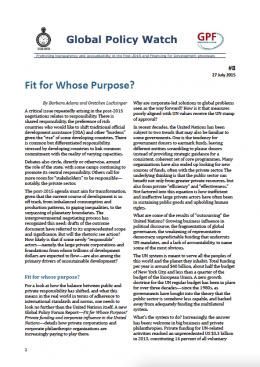 Debates also circle, directly or otherwise, around the role of the state, with some camps continuing to promote its central responsibility. Others call for more room for “stakeholders” to be responsible—notably, the private sector.

The post-2015 agenda must aim for transformation, given that the current course of development is so off track, from imbalanced consumption and production patterns, to gaping inequalities, to the surpassing of planetary boundaries. The intergovernmental negotiating process has recognized this need; drafts of the outcome document have referred to its unprecedented scope and significance. But will the rhetoric see action? How likely is that if some newly “responsible” actors—namely, the large private corporations and foundations from whom trillions of development dollars are expected to flow—are also among the primary drivers of unsustainable development?