The Future of Civil Society Participation at the United Nations 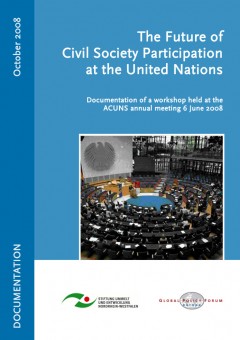 Having seen dynamic developments in the 1990s, relations between the United Nations (UN) and civil society are now at a critical stage. The number of private actors participating in international negotiations has been increasing and led to a more extensive involvement of these actors in global policy processes. But all attempts to extend formal participatory rights for Non-Governmental Organizations (NGOs) in the UN have failed so far.

Some governments have responded rather defensively to the increasing (quantitative) presence of non-state actors in the UN, warning against the “flooding” of the world organisation with NGOs. But even governments who have been traditionally more open to NGO demands have held back in the current reform debates on the issue.
Given the impasse over further participatory rights, increasing numbers of governments, UN institutions and even some NGOs favour a more informal form of co-operation within the framework of “multistakeholder initiatives” and “partnerships” between public and private actors.

In the light of these trends, the following gloomy scenario appears plausible for the future relations between the UN and civil society: On one side, intergovernmental negotiations and decision- making processes will shift away from world conferences and Special Sessions of the General Assembly with active NGO participation, and towards basically “NGO-free” spaces, such as informal consultations of the General Assembly.
On the other side, multistakeholder initiatives, involving only selected NGOs which have demonstrated their willingness to enter into dialogue and co-operation with governments and business, will gain increasing importance.

With the growing role of civil society organisations and the trend towards new forms of global governance, the accountability of these actors and institutions have become a major concern, as in the words of Jan Aart Scholte, accountability is crucial to the establishment and maintenance of the effective and legitimate global governance that the
present-day world vitally needs.

Published by: Global Policy Forum Europe and the Foundation for Environment and Development North-Rhine-Westphalia