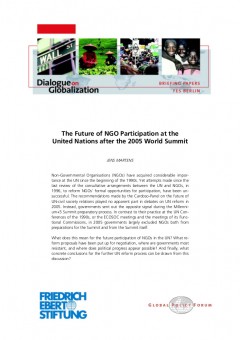 Non-Governmental Organisations (NGOs) have acquired considerable importance at the UN since the beginning of the 1990s. Yet attempts made since the last review of the consultative arrangements between the UN and NGOs, in 1996, to reform NGOs’ formal opportunities for participation, have been unsuccessful. The recommendations made by the Cardoso-Panel on the future of UN-civil society relations played no apparent part in debates on UN reform in 2005. Instead, governments sent out the opposite signal during the Millennium+ 5 Summit preparatory process. In contrast to their practice at the UN Conferences of the 1990s, or the ECOSOC meetings and the meetings of its Functional Commissions, in 2005 governments largely excluded NGOs both from preparations for the Summit and from the Summit itself.

What does this mean for the future participation of NGOs in the UN? What reform proposals have been put up for negotiation, where are governments most resistant, and where does political progress appear possible? And finally, what concrete conclusions for the further UN reform process can be drawn from this discussion?