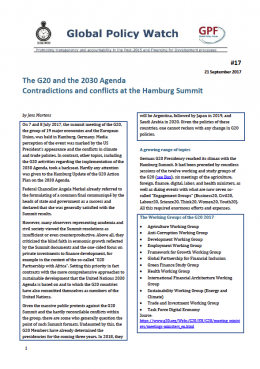 On 7 and 8 July 2017, the summit meeting of the G20, the group of 19 major economies and the European Union, was held in Hamburg, Germany. Media perception of the event was marked by the US President’s appearance and the conflicts in climate and trade policies. In contrast, other topics, including the G20 activities regarding the implementation of the 2030 Agenda, took a backseat. Hardly any attention was given to the Hamburg Update of the G20 Action Plan on the 2030 Agenda.

Federal Chancellor Angela Merkel already referred to the formulating of a common final communiqué by the heads of state and government as a success and declared that she was generally satisfied with the Summit results.