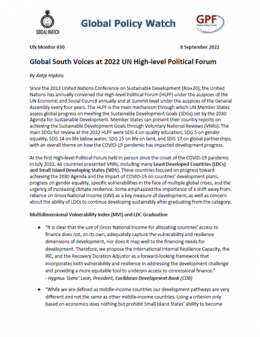 Since the 2012 United Nations Conference on Sustainable Development (Rio+20), the United Nations has annually convened the High-level Political Forum (HLPF) under the auspices of the UN Economic and Social Council annually and at Summit level under the auspices of the General Assembly every four years. The HLPF is the main mechanism through which UN Member States assess global progress on meeting the Sustainable Development Goals (SDGs) set by the 2030 Agenda for Sustainable Development. Member States can present their country reports on achieving the Sustainable Development Goals through Voluntary National Reviews (VNRs). The main SDGs for review at the 2022 HLPF were SDG 4 on quality education, SDG 5 on gender equality, SDG 14 on life below water, SDG 15 on life on land, and SDG 17 on global partnerships, with an overall theme on how the COVID-19 pandemic has impacted development progress.

At the first High-level Political Forum held in person since the onset of the COVID-19 pandemic in July 2022, 44 countries presented VNRs, including many Least Developed Countries (LDCs) and Small Island Developing States (SIDS). These countries focused on progress toward achieving the 2030 Agenda and the impact of COVID-19 on countries’ development plans, progress on gender equality, specific vulnerabilities in the face of multiple global crises, and the urgency of increasing climate resilience. Some emphasized the importance of a shift away from reliance on Gross National Income (GNI) as a key measure of development, as well as concern about the ability of LDCs to continue developing sustainably after graduating from the category.

Impact of COVID-19 on economic and social development

Many of the VNRs delivered by representatives of SIDS and LDCs, as well as the sessions dedicated to these countries, elaborated that LDCs and SIDS have faced major setbacks in achieving the SDGs and their own countries’ development goals, due heavily to the concurrent crises of COVID-19 and climate change. Many of these countries produce very little emissions harmful to the environment, yet they are among the most vulnerable to flooding due to rising sea levels, droughts, torrential rains, and other climate disasters.

Many LDCs and SIDS have enacted laws and adopted plans to work towards gender equality. While progress has been made, the presentations by Guinea-Bissau and Liberia, for instance, named Female Genital Mutilation as a persistent hurdle toward achieving gender equality. These and other LDCs acknowledged that more work needs to be done to prioritize gender equality. Other developing countries stated that while achieving the SDGs remains a top priority, it is especially difficult for their governments to fund all the programmes necessary to work towards their achievement. As the midpoint for the 2030 Agenda approaches, the results of the mid-term review at the 2023 SDG Summit will be critical to chart a correction course as well as adopt robust new measures and commitments.