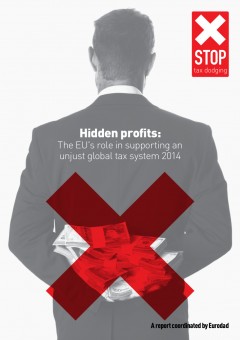 Last week, the Luxembourg Leaks investigation exposed the secret deals which have allowed transnational companies to dodge taxes on a colossal scale. In its wake, a new report – Hidden Profits – compares 15 EU countries’ performance on combating tax dodging and ensuring financial transparency and finds they are still failing to address urgent problems which cost both developed  and developing countries billions of euros every year.

Tove Maria Ryding, Tax Justice Coordinator at the European Network on Debt and Development, said: “We’ve examined whether EU governments are delivering on their promises to fight tax dodging and financial opacity, and the results are very disappointing. Progress is extremely slow and some countries even seem to be moving backwards. But while our leaders are failing to fix our tax system, transnational corporations continue to dodge taxes in Europe as well as in the world’s poorest countries, where income from corporate taxation is desperately needed. Thanks to our flawed European policies, tax dodgers still have a place to hide.”

A direct comparison of the 15 countries finds that:

This week, governments are negotiating how to fix the global tax system. However, the negotiations are happening in two separate forums – in the UN headquarters in New York, where all countries participate, and at the G20 meeting in Australia, where only rich countries are invited to participate.

Tove Ryding said: “We've seen scandal after scandal, exposing the fact that the world's largest corporations are hardly paying any taxes at all - the latest being the Luxembourg Leaks investigation. However, the failure of the global tax system is not only the fault of one country - it is a collective failure. So far, the EU and G20 leaders have responded with lots of talk but very little action, and the poorest countries have not even been allowed to participate in the decision making. The lack of global cooperation between governments is a key reason why the tax system became such a mess in the first place. The tax system is in a state of emergency, and it’s time for governments to find ambitious global solutions that also work for the poor. That’s why we’re calling for a new tax body under the United Nations, where poor countries also have a seat at the table.”

Published by: Eurodad, Global Policy Forum Europe and others