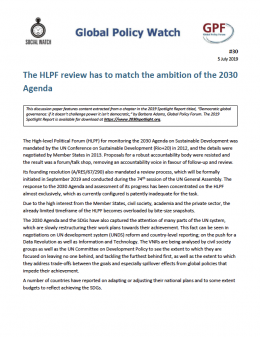 The High-level Political Forum (HLPF) for monitoring the 2030 Agenda on Sustainable Development was mandated by the UN Conference on Sustainable Development (Rio+20) in 2012, and the details were negotiated by Member States in 2013. Proposals for a robust accountability body were resisted and   the result was a forum/talk shop, removing an accountability voice in favour of follow-up and review.

Its founding resolution (A/RES/67/290) also mandated a review process, which will be formally initiated in September 2019 and conducted during the 74th session of the UN General Assembly. The response to the 2030 Agenda and assessment of its progress has been concentrated on the HLPF almost exclusively, which as currently configured is patently inadequate for the task.

Due to the high interest from the Member States, civil society, academia and the private sector, the already limited timeframe of the HLPF becomes overloaded by bite-size snapshots.

The 2030 Agenda and the SDGs have also captured the attention of many parts of the UN system, which are slowly restructuring their work plans towards their achievement. This fact can be seen in negotiations on UN development system (UNDS) reform and country-level reporting; on the push for a Data Revolution as well as Information and Technology. The VNRs are being analysed by civil society groups as well as the UN Committee on Development Policy to see the extent to which they are focused on leaving no one behind, and tackling the furthest behind first, as well as the extent to which they address trade-offs between the goals and especially spillover effects from global policies that impede their achievement.

A number of countries have reported on adapting or adjusting their national plans and to some extent budgets to reflect achieving the SDGs.