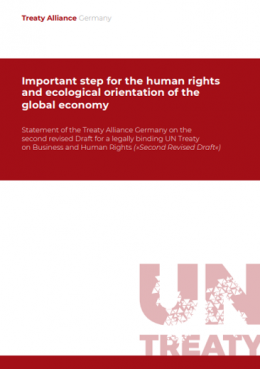 In June 2014, the Human Rights Council of the United Nations (UNHRC) mandated an intergovernmental working group (Resolution 26/9) to develop an interna-tional instrument to regulate the activities of transnational and other corporations. The aim of the process is to close the legal gaps in the protection of human rights in the global economy that have emerged in the course of globali-zation. So far, in five rounds of negotiations, governments, legal experts and representatives of civil society and busi-ness have debated the legal content of the treaty. Based on these consultations, the Ecuadorian Chair of the working group published a second revised draft treaty in August 20201, which has more stringency and clarity compared to previous versions. The draft constitutes the basis for substantive negotiations during the sixth meeting of the working group from October 26 to 30, 2020.