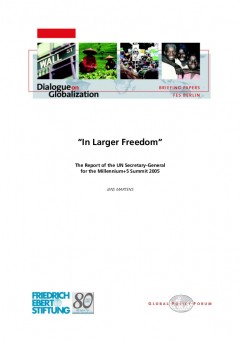 This Global Policy Forum and Friedrich Ebert Foundation Briefing Paper examines Secretary General Kofi Annan's UN reform agenda and notes that "for some, the initiatives are not sufficiently far-reaching, [yet] others view them as too radical and unsuitable to implement politically." The paper criticizes Annan for his weak stance on alternative development financing, including global taxes on currency transactions. It also draws attention to the need for greater civil society participation in the preparations for the Millennium+5 Summit in September 2005.