LDCs and Their “Graduation” 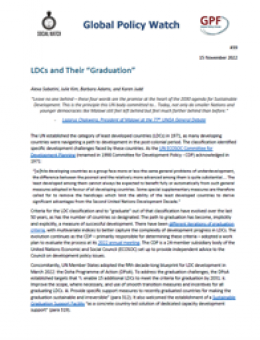 “[w]hile developing countries as a group face more or less the same general problems of underdevelopment, the difference between the poorest and the relatively more advanced among them is quite substantial…. The least developed among them cannot always be expected to benefit fully or automatically from such general measures adopted in favour of all developing countries. Some special supplementary measures are therefore called for to remove the handicaps which limit the ability of the least developed countries to derive significant advantages from the Second United Nations Development Decade.”

Criteria for the LDC classification and to “graduate” out of that classification have evolved over the last 50 years, as has the number of countries so designated.