LDCs present VNRs at the HLPF 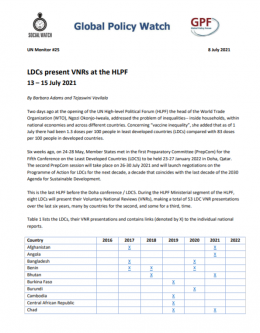 By Barbara Adams and Tejaswini Vavilala

Two days ago at the opening of the UN High-level Political Forum (HLPF) the head of the World Trade Organization (WTO), Ngozi Okonjo-Iweala, addressed the problem of inequalities-- inside households, within national economies and across different countries.

Concerning “vaccine inequality”, she added that as of 1 July there had been 1.3 doses per 100 people in least developed countries (LDCs) compared with 83 doses per 100 people in developed countries. Six weeks ago, on 24-28 May, Member States met in the first Preparatory Committee (PrepCom) for the Fifth Conference on the Least Developed Countries (LDC5) to be held 23-27 January 2022 in Doha, Qatar. The second PrepCom session will take place on 26-30 July 2021 and will launch negotiations on the Programme of Action for LDCs for the next decade, a decade that coincides with the last decade of the 2030 Agenda for Sustainable Development.

This is the last HLPF before the Doha conference / LDC5. During the HLPF Ministerial segment of the HLPF, eight LDCs will present their Voluntary National Reviews (VNRs), making a total of 53 LDC VNR presentations over the last six years, many by countries for the second, and some for a third, time.

Table 1 lists the LDCs, their VNR presentations and contains links (denoted by X) to the individual national reports.