Loss and damage from climate change: How much should rich countries pay? 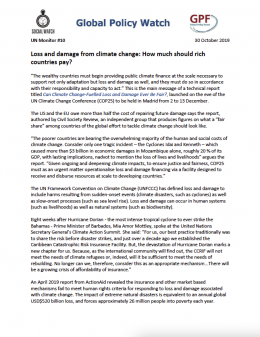 “The wealthy countries must begin providing public climate finance at the scale necessary to support not only adaptation but loss and damage as well, and they must do so in accordance with their responsibility and capacity to act.” This is the main message of a technical report titled Can Climate Change-Fuelled Loss and Damage Ever Be Fair?, launched on the eve of the UN Climate Change Conference (COP25) to be held in Madrid from 2 to 13 December.

The US and the EU owe more than half the cost of repairing future damage says the report, authored by Civil Society Review, an independent group that produces figures on what a “fair share” among countries of the global effort to tackle climate change should look like.

“The poorer countries are bearing the overwhelming majority of the human and social costs of climate change. Consider only one tragic incident – the Cyclones Idai and Kenneth – which caused more than $3 billion in economic damages in Mozambique alone, roughly 20 % of its GDP, with lasting implications, not to mention the loss of lives and livelihoods” argues the report. “Given ongoing and deepening climate impacts, to ensure justice and fairness, COP25 must as an urgent matter operationalise loss and damage financing via a facility designed to receive and disburse resources at scale to developing countries.”