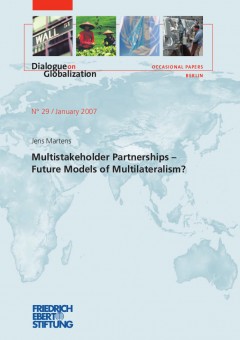 In times of growing dissatisfaction on the part of governments, international organizations as well as on the part of civil society organizations with the groaning pace of the global negotiation process, and the current diffi culties on the part of governments to engage in new compromises on the multilateral front, new partnership models between governments, business and civil society are increasingly gaining attention. In fact, “multistakeholder initiatives” and “policy networks” between private and public actors are experiencing a boom which appears to be expanding unfettered within the United Nations system. These partnership models appear as the new “mantra” shaping the discourse on global politics and are perceived by many as a new hope for multilateralism.

However, there are also critical voices concerning the new partnership approach. Above all, the risk of an overwhelming infl uence of private business, in particular, the potential decision-making power private actors could gain on international political priorities and its fi nancial commitments are widely criticized. But, despite the controversial assessments of these new developments, a more fundamental critical engagement with the new partnership models is still lacking, and, so far, there is no systematic evaluation of the existing partnerships within the UN system.

Dialogue on Globalization Occasional Paper No. 29