The New Alliance for Food Security and Nutrition in Africa: Is the initiative by the G8 countries suitable for combating poverty? 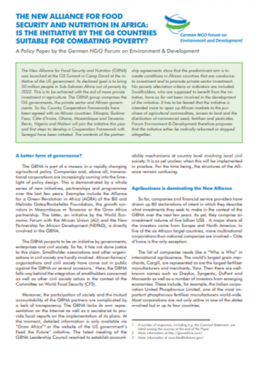 A new policy paper published by the German NGO Forum on Environment and Development argues that the G8 New Alliance for Food Security and Nutrition in Africa will not be able to combat hunger and food insecurity in Africa. On the contrary, the paper, to which Global Policy Forum contributed, points out that the New Alliance is mainly focused on providing multinationals with opportunities to reap profits through the creation of environments conducive to investment. Thus, the paper calls for either a radical reform of the New Alliance or its abolishment.

The New Alliance for Food Security and Nutrition (G8NA) was launched at the G8 Summit in Camp David at the initiative of the US government. Its declared goal is to bring 50 million people in Sub-Saharan Africa out of poverty by 2022. This is to be achieved with the aid of more private investment in agriculture. The G8NA group comprises the G8 governments, the private sector and African governments. So far, Country Cooperation Frameworks have been agreed with six African countries: Ethiopia, Burkina Faso, Côte d’Ivoire, Ghana, Mozambique and Tanzania. Benin, Nigeria and Malawi will join the initiative this year and first steps to develop a Cooperation Framework with Senegal have been initiated.

The contents of the partnership agreements show that the predominant aim is to create conditions in African countries that are conducive to investment and to promote private-sector investment. No poverty alleviation criteria or indicators are included. Smallholders, who are supposed to benefit from the initiative, have so far not been involved in the development of the initiative. It has to be feared that the initiative is intended more to open up African markets to the purchase of agricultural commodities, access to land and the distribution of commercial seed, fertiliser and pesticides. Forum Environment & Development therefore proposes that the initiative either be radically reformed or stopped altogether.