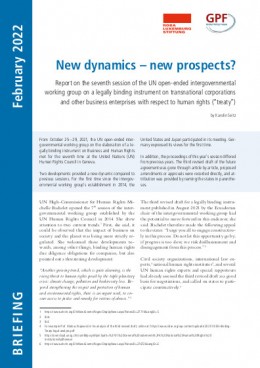 From October 25-29, 2021, the UN open-ended intergovernmental working group on the elaboration of a legally binding instrument on Business and Human Rights met for the seventh time at the United Nations (UN) Human Rights Council in Geneva. Two developments provided a new dynamic compared to previous sessions. For the first time since the intergovernmental working group’s establishment in 2014, the United States and Japan participated in its meeting. Germany expressed its views for the first time. In addition, the proceedings of this year's session differed from previous years. The third revised draft of the future agreement was gone through article by article, proposed amendments or approvals were recorded directly, and attribution was provided by naming the states in parentheses.

In its coalition agreement, Germany's new government is committed to the socio-ecological transformation as well as to the continuation of the Alliance for Multilateralism initiated by Heiko Maas. However, for the new government, multilateral action in certain areas seems to end at Europe's borders. While it is in favor of an EU-wide supply chain law, it says nothing about its future involvement in the UN treaty process.  Yet a UN treaty could contribute significantly to the planned transformation and better protect people, the environment, and the climate.

Participation in the "Friends of the Chair" group would be an important step by the European Union to advance consensus building among states on the future agreement. In addition, the EU Commission should have clarified the negotiating mandate by the next meeting of the UN Working Group in October 2022.