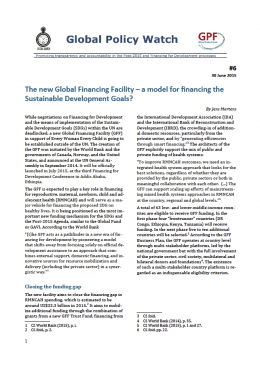 While negotiations on Financing for Development and the means of implementation of the Sustainable
Development Goals (SDGs) within the UN are deadlocked, a new Global Financing Facility (GFF) in support of Every Woman Every Child is going to be established outside of the UN. The creation of the GFF was initiated by the World Bank and the governments of Canada, Norway, and the United States, and announced at the UN General Assembly in September 2014. It will be officially launched in July 2015, at the third Financing for Development Conference in Addis Ababa, Ethiopia.

The GFF is expected to play a key role in financing for reproductive, maternal, newborn, child and adolescent health (RMNCAH) and will serve as a major vehicle for financing the proposed SDG on healthy lives. It is being positioned as the most important new funding mechanism for the SDGs and the Post-2015 Agenda, similar to the Global Fund or GAVI. According to the World Bank

(t)he GFF acts as a pathfinder in a new era of financing for development by pioneering a model that shifts away from focusing solely on official development assistance to an approach that combines external support, domestic financing, and innovative sources for resource mobilization and delivery (including the private sector) in a synergistic way.