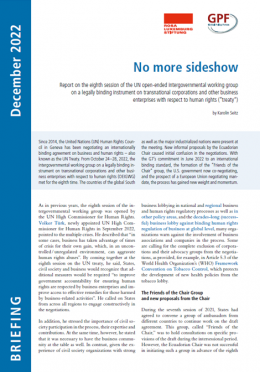 Since 2014, the United Nations (UN) Human Rights Coun­cil in Geneva has been negotiating an internationally binding agreement on business and human rights – also known as the UN Treaty. From October 24–28, 2022, the intergovernmental working group on a legally binding in­strument on transnational corporations and other busi­ness enterprises with respect to human rights (OEIGWG) met for the eighth time. The countries of the global South as well as the major industrialized nations were present at the meeting. New informal proposals by the Ecuadorian Chair caused initial confusion in the negotiations. With the G7’s commitment in June 2022 to an international binding standard, the formation of the ”Friends of the Chair“ group, the U.S. government now co-negotiating, and the prospect of a European Union negotiating man­date, the process has gained new weight and momentum.