From the ore to the car 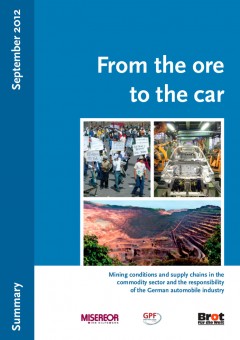 In a recently released short documentary, Brazilian initiative Justiça nos Trilhos (JnT) explains about social and environmental conflicts in iron ore extraction in the Amazon region of Carajás, northern Brazil—and the connections with the German car industry. Again and again, mining and processing of natural resources has involved violations of human rights and an escalating of violence and conflicts. Largely, this problem has lately received public attention as far as diamonds, coltan and other “conflict commodities” are concerned. However, the extraction of other commodities, such as iron, copper and bauxite, frequently also goes hand in hand with violations of human rights, severe environmental degradation, conflicts and the criminalisation of human rights defenders.

The documentary resonates very well with the report "From the ore to the car" that was released by Global Policy Forum together with Bread for the World and MISEREOR already in 2012.