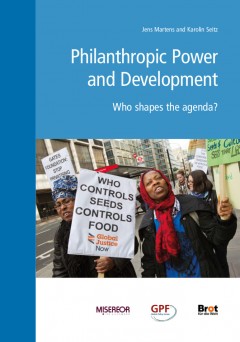 Cover
Who shapes the agenda?

For the last few decades, increasing globalization of the world economy and waves of deregulation and privatization have facilitated the emergence and increased the power of private actors, particularly of large transnational corporations. However, it is not only “big business” but also “big philanthropy” that has an increasing influence in global (development) policy, particularly large philanthropic foundations. They have become influential actors in international policy debates, including, most importantly, how to address poverty eradication, sustainable development, climate change and the protection of human rights. The scope of their influence in both past and present discourse and decision-making processes is fully equal to and in some cases goes beyond that of other private actors. Through the sheer size of their grant-making, personal networking and active advocacy, large global foundations, most notably the Rockefeller Foundation and the Bill & Melinda Gates Foundation, have played an increasingly active role in shaping the agenda-setting and funding priorities of international organizations and governments. So far, there has been a fairly willing belief among governments and international organizations in the positive role of philanthropy in global development.