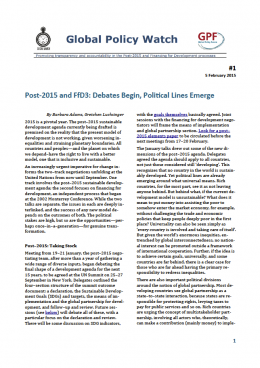 2015 is a pivotal year. The post–2015 sustainable development agenda currently being drafted is premised on the reality that the present model of development is not working, given worsening inequalities and straining planetary boundaries. All countries and peoples—and the planet on which we depend–have the right to live with a better model, one that is inclusive and sustainable.
An increasingly urgent imperative for change informs the two–track negotiations unfolding at the United Nations from now until September. One track involves the post–2015 sustainable development agenda; the second focuses on financing for development, an independent process that began at the 2002 Monterrey Conference. While the two talks are separate, the issues in each are deeply interlinked, and the success of any new model depends on the outcomes of both. The political stakes are high, but so are the opportunities - perhaps once-in-a-generation - for genuine transformation.