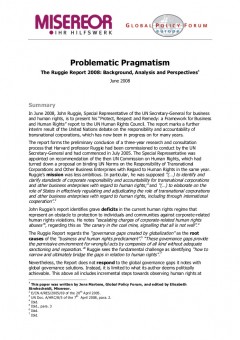 In June 2008, John Ruggie, Special Representative of the UN Secretary-General for business and human rights, is to present his “Protect, Respect and Remedy: a Framework for Business and Human Rights” report to the UN Human Rights Council. The report marks a further interim result of the United Nations debate on the responsibility and accountability of transnational corporations, which has now been in progress on for many years.