A Question of Political Will 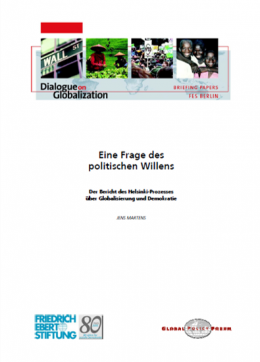 On the 29th of June 2005 the Finnish government published the Helsinki Group Report, under the programmatic title ‘Mobilising Political Will‘. The report marks the first peak of the Helsinki Process on Globalisation and Democracy launched by the Finnish and Tanzanian governments in 2002. The two governments have an ambitious goal, comparing their initiative to the first Helsinki process in the 1970s, which at the time contributed to the resolution of the conflict between East and West. Now they hope the “2nd Helsinki Process“ will help bridge the gap between North and South and “bring more democracy into international relations”. Contrary to the first process the second one does not only represent an intergovernmental initiative.

The title page of the Helsinki Report declares that “problems of a truly global nature cannot be solved by states alone - solving them requires goal-oriented cooperation between all stakeholder“. Consequently the Helsinki Process takes a multi-stakeholder approach and involves a number of civil society and business representatives. The group’s report was deliberately released a few days before the G8 summit in Gleneagles, Scotland, and was intended to influence discussions there as well as at the UN Millennium+5 summit in September 2005. It also forms the basis of the 2nd international conference of the Helsinki Process, which will take place in the Finnish capital from the 7th to the 9th of September. However, the report’s remit extends beyond what is politically realisable in the short term this year. Its recommendations on the reform of global governance systems, in particular, will still remain relevant after the 2005 summits.