Report of the UN Millennium Project „Investing in Development“ 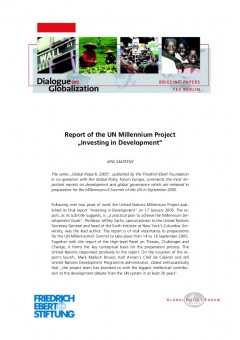 Following over two years of work the United Nations Millennium Project published its final report “Investing in Development” on 17 January 2005. The report, as its sub-title suggests, is „a practical plan to achieve the Millennium Development Goals”. Professor Jeffrey Sachs, special advisor to the United Nations Secretary General and head of the Earth Institute at New York’s Columbia University, was the lead author. The report is of vital importance to preparations for the UN Millennium+5 Summit to take place from 14 to 16 September 2005. Together with the report of the High-level Panel on Threats, Challenges and Change, it forms the key conceptual basis for the preparation process. The United Nations responded positively to the report. On the occasion of the report’s launch, Mark Malloch Brown, Kofi Annan’s Chef de Cabinet and still United Nations Development Programme administrator, stated enthusiastically that „the project team has provided us with the biggest intellectual contribution to the development debate from the UN system in at least 20 years”.