The Security Council and Iraq: Should the Council Renew the MNF Mandate for 2008? 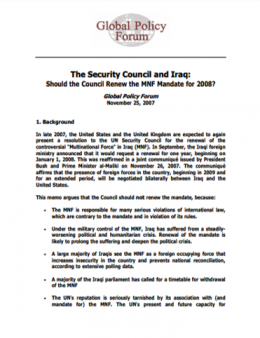 The UN mandate authorizing the Multinational Force in Iraq is up for renewal in late 2007. In this memorandum, Global Policy Forum argues that the Security Council should not renew the mandate. The memo recalls the many ways that the MNF violates international law and human rights. It points out that the political and humanitarian situation in Iraq is worsening and the great majority of Iraqis see the MNF as an occupying force that prevents national reconciliation. The Iraqi parliament has called for a withdrawal timetable and insisted on its right to ratify any MNF renewal request. A renewal would weaken the UN, promote a US protectorate in Iraq, and damage security in the Middle East region.