Steps Out Of the Global Development Crisis 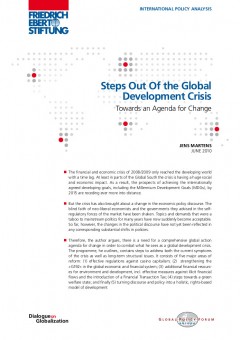 Cover
Towards an Agenda for Change

The financial and economic crisis of 2008/2009 only reached the developing world with a time lag. At least in parts of the Global South the crisis is having a huge social and economic impact. As a result, the prospects of achieving the internationallyagreed developing goals, including the Millennium Development Goals (MDGs), by2015 are receding ever more into distance.But the crisis has also brought about a change in the economic policy discourse. The blind faith of neo-liberal economists and the overnments they advised in the selfregulatory forces of the market have been shaken. Topics and demands that were a taboo to mainstream politics for many years have now suddenly become acceptable. So far, however, the changes in the political discourse have not yet been reflected in any corresponding substantial shifts in policies. Therefore, the author argues, there is a need for a comprehensive global action agenda for change in order to combat what he sees as a global development crisis.

The programme, he outlines, contains steps to address both the current symptoms of the crisis as well as long-term structural issues. It consists of five major areas of reform: (1) effective regulations against casino capitalism; (2) strengthening the »G192« in the global economic and financial system; (3) additional financial resources for environment and development, incl. effective measures against illicit financial flows and the introduction of a Financial Transaction Tax; (4) steps towards a green welfare state; and finally (5) turning discourse and policy into a holistic, rights-based model of development