The Struggle to Shape the Agenda 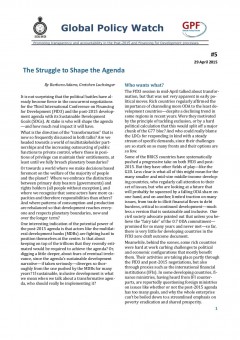 It is not surprising that the political battles have already become fierce in the concurrent negotiations for the Third International Conference on Financing for Development (FfD3) and the post-2015 development agenda with its Sustainable Development Goals (SDGs). At stake is who will shape the agenda—and how much real impact it will have.

What is the direction of the “transformation” that is now so frequently discussed in both talks? Are we headed towards a world of multistakeholder partnerships and the increasing outsourcing of public functions to private control, where those in positions of privilege can maintain their entitlements, at least until we fully breach planetary boundaries?

Or towards a world where we make decisions based foremost on the welfare of the majority of people and the planet? Where we embrace the distinction between primary duty bearers (governments) and rights holders (all people without exception), and where we recognize that some actors have more capacities and therefore responsibilities than others? And where patterns of consumption and production are rebalanced so that development reaches everyone and respects planetary boundaries, now and over the longer term?

One interesting indication of the potential power of the post-2015 agenda is that actors like the multilateral development banks (MDBs) are fighting hard to position themselves at the centre. Is that about keeping on top of the trillions that they recently estimated would be required to achieve the agenda? Or, digging a little deeper, about fears of eventual irrelevance, since the agenda’s sustainable development narrative—if taken seriously—diverges so thoroughly from the one pushed by the MDBs for many years? If sustainable, inclusive development is what we mean when we talk about a transformative agenda, who should really be implementing it?