The Struggle for a UN Treaty 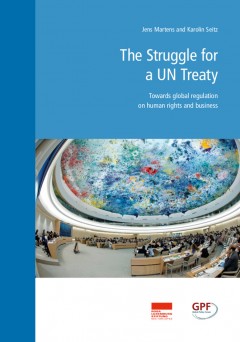 Cover
Towards global regulation on human rights and business

Over the course of the last years, the international debate surrounding the environmental, social and human rights responsibilities of corporations has gained momentum. Not least, growing public criticism of transnational corporations and banks has contributed to this debate. The list of criticisms is long: Ever-new pollution scandals (most recently the VW emissions scandal), disregard for the most basic labour and human rights standards (for example in Bangladesh’s textile or the Chinese IT industry), massive bribery allegations (faced for example by Siemens for years), as well as widespread corporate tax avoidance strategies (such as Google, Starbucks and IKEA).

Against this background, the United Nations Human Rights Council took the historic decision to establish a working group “to elaborate an international legally binding instrument to regulate, in international human rights law, the activities of transnational corporations and other business enterprises.” This binding agreement should complement the existing UN Guiding Principles on Business and Human Rights, which show serious shortcomings.

A global alliance of several hundred civil society organisations has been at the forefront of such a demand. This Treaty Alliance recommends the establishment of a binding treaty to regulate the activities of transnational corporations and other business enterprises with respect to human rights.

This working paper presents the basic facts concerning the current discussions at the UN Human Rights Council. It outlines the events leading up to today’s discussions, describes the controversies and lines of conflict, sets out the potential content of a legally binding instrument on business and human rights and concludes with some remarks on the further process.

By Jens Martens and Karolin Seitz